Through the eyes of: Derek Reese!

We have blended tobacco with the perfect amount of Kentucky bourbon. Among those fragrances you will get a hint of cherry, notes of vanilla with earthy infused essential oils. Hints of rosewood, cedar, smoke, and sweet birch. Take pride in all you do! Being the greatest warrior on the battlefield after this perfect shave. Enriched oils are like your sword and a great lather are to be your shield. Winning this battle every time with the perfect scented soap. After a long day a warrior would relax with flavored smoke & bourbon. This soap is infused with tobacco tea and real Kentucky bourbon for that added fragrance and aroma.

Notice: These shave soaps are soft and heat-sensitive. Please keep this in mind, should you live in a hot climate, with regards to product shipment.

Van Yulay makes a croap shaving soap, that is neither a cream or a hard puck, but in between.

Van Yulay shave soap whips up into a yogurt like, creamy lather in just a few minutes.  Formulated with a superior, protective cushion, we make each soap with your skin mind.  With that said, we incorporate quality, vitamin enriched, oils and butters, chosen specifically to hydrate your skin.

“Leaving your skin better than when we first met.”

Calendula – is used to disinfect minor wounds and to treat infections of the skin. The antibacterial and immunostimulant properties of the plant make it extremely useful in treating slow-healing cuts and cuts in people who have compromised immune systems. The herb stimulates the production of collagen at wound sites and minimizes scarring. Natural moisturizer with powerful emollients and protective properties.

· Tallow Oil – is considered to be a superior emollient that is beneficial for either dry or oily complexions. It gently moisturizes the skin without leaving an oily sheen. 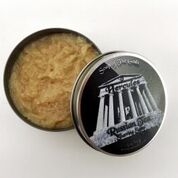